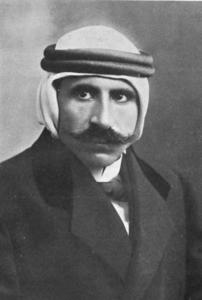 Faiz El-Ghusein (Arabic: فايز الغصين) (1883–1968) was a sheikh from the Hauran, and a former official of the Turkish Government. He is most widely remembered as the author of Martyred Armenia, an alleged eyewitness account of Armenian genocide.
Read more or edit on Wikipedia