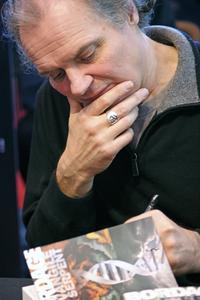 Pierre Bordage (born 29 January 1955 in La Réorthe, Vendée) is a French science fiction author. He won the Cosmos 2000 prize in 1996 for his novel La Citadelle Hyponéros. Pierre Bordage is one of France's best-selling science fiction writers. With more than 20 novels published in just over a decade, his books often touch on the spiritual aspects of society, in a style that combines the best of classic adventure stories with reflection on the future and the present. Bordage's books are best-sellers in France, and have been translated in several European countries (Russia, Italia, Spain, Slovenia, Romania...) but there still remains the difficulty of getting published in English, especially in the United States. He was winner of the 2008 Cezam Prix Littéraire Inter CE for Porteur d’âmes.He was influenced by Philip José Farmer, Robert A. Heinlein, Frank Herbert, Orson Scott Card, and Star Wars.
Read more or edit on Wikipedia