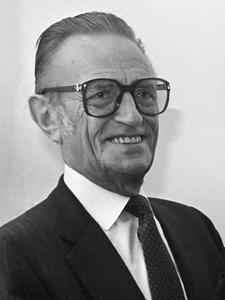 Willy Vandersteen (15 February 1913 – 28 August 1990) was a Belgian creator of comic books. In a career spanning 50 years, he created a large studio and published more than 1,000 comic albums in over 25 series, selling more than 200 million copies worldwide.Considered together with Marc Sleen the founding father of Flemish comics, he is mainly popular in Belgium, the Netherlands and Germany. Hergé called him "The Brueghel of the comic strip", while the creation of his own studio and the mass production and commercialization of his work turned him into "the Walt Disney of the Low Countries".Vandersteen is best known for Suske en Wiske (published in English as Spike and Suzy, Luke and Lucy, Willy and Wanda or Bob and Bobette), which in 2008 sold 3.5 million books. His other major series are De Rode Ridder with over 200 albums and Bessy with almost 1,000 albums published in Germany.
Read more or edit on Wikipedia