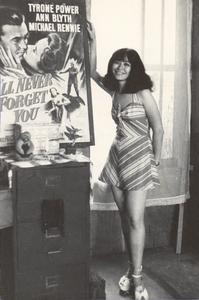 Florence Steinberg (March 17, 1939 – July 23, 2017) was an American publisher of one of the first independent comic books, the underground/alternative comics hybrid Big Apple Comix, in 1975. Additionally, as the secretary for Marvel Comics editor Stan Lee and the fledgling company's receptionist and fan liaison during the 1960s Silver Age of Comic Books, she was a key participant of and witness to Marvel's expansion from a two-person staff to a pop culture conglomerate. Steinberg appeared in fictionalized form in Marvel Comics, spoke at comic book conventions and was the subject of a magazine profile.
Read more or edit on Wikipedia