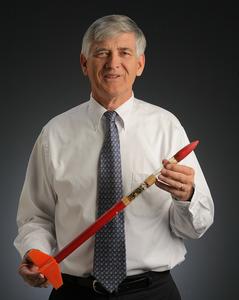 Forrest M. Mims III is an American amateur scientist, magazine columnist, and author of Getting Started in Electronics and Engineer's Mini-Notebook series of instructional books that were originally sold in Radio Shack electronics stores. Mims graduated from Texas A&M University in 1966 with a major in government and minors in English and history. He became a commissioned officer in the United States Air Force. Mims has no formal academic training in science, but still went on to have a successful career as a science author, researcher, lecturer and syndicated columnist. His series of electronics books sold over 7 million copies and he is widely regarded as one of the world's most prolific citizen scientists. Mims does scientific studies in many fields using instruments he designs and makes and he has been published in a number of peer-reviewed journals, often with professional scientists as co-authors. Much of his research deals with ecology and environmental science. A simple instrument he developed to measure the ozone layer earned him a Rolex Award for Enterprise in 1993. In December 2008 Discover named Mims one of the "50 Best Brains in Science."Mims edited The Citizen Scientist — the journal of the Society for Amateur Scientists — from 2003 to 2010. He is also the Chairman of the Environmental Science Section of the Texas Academy of Science. He also teaches electronics and atmospheric science at the University of the Nations, an unaccredited Christian university in Hawaii. He is a member of the Institute of Electrical and Electronics Engineers. Mims is a Fellow of the pseudoscientific organizations International Society for Complexity, Information and Design and Discovery Institute which propagate creationism. He is also a skeptic of anthropogenic global warming.
Read more or edit on Wikipedia