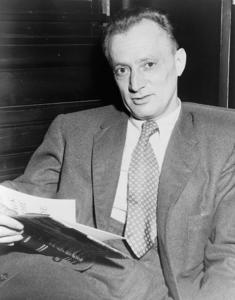 Nelson Algren (born Nelson Ahlgren Abraham; March 28, 1909 – May 9, 1981) was an American writer. His 1949 novel The Man with the Golden Arm won the National Book Award and was adapted as the 1955 film of the same name. Algren articulated the world of "drunks, pimps, prostitutes, freaks, drug addicts, prize fighters, corrupt politicians, and hoodlums". Art Shay singled out a poem Algren wrote from the perspective of a "halfy", street slang for a legless man on wheels. Shay said that Algren considered this poem to be a key to everything he had ever written. The protagonist talks about "how forty wheels rolled over his legs and how he was ready to strap up and give death a wrestle".According to Harold Augenbraum, "in the late 1940s and early 1950s he was one of the best known literary writers in America". The lover of French writer Simone de Beauvoir, he is featured in her novel The Mandarins, set in Paris and Chicago. He was called "a sort of bard of the down-and-outer" based on this book, but also on his short stories in The Neon Wilderness (1947) and his novel A Walk on the Wild Side (1956). The latter was adapted as the 1962 film of the same name (directed by Edward Dmytryk, screenplay by John Fante).
Read more or edit on Wikipedia