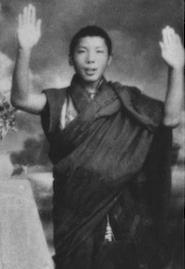 Chögyam Trungpa (Wylie: Chos rgyam Drung pa; March 5, 1939 – April 4, 1987) was a Tibetan Buddhist meditation master and holder of both the Kagyu and Nyingma lineages of Tibetan Buddhism, the 11th of the Trungpa tülkus, a tertön, supreme abbot of the Surmang monasteries, scholar, teacher, poet, artist, and originator of a radical re-presentation of Tibetan Buddhist teachings and the myth of Shambhala as an enlightened society that was later called Shambhala Buddhism. Recognized both by Tibetan Buddhists and by other spiritual practitioners and scholars as a preeminent teacher of Tibetan Buddhism, he was a major figure in the dissemination of Buddhism in the West, founding Vajradhatu and Naropa University and establishing the Shambhala Training method. Among his contributions are the translation of numerous Tibetan Buddhist texts, the introduction of the Vajrayana teachings to the West, and a presentation of the Buddhadharma largely devoid of ethnic trappings. Trungpa coined the term crazy wisdom. Some of his teaching methods and actions, particularly his heavy drinking, womanizing, and the physical assault of a student and his wife, caused controversy during his lifetime and afterward.
Read more or edit on Wikipedia