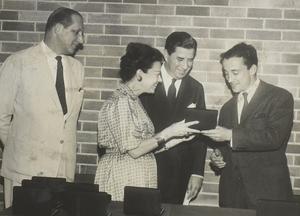 Louis Marie Malle (French: [lwi mal]; 30 October 1932 – 23 November 1995) was a French film director, screenwriter, and producer. His film Le Monde du silence won the Palme d'Or in 1956 and the Academy Award for Best Documentary in 1957, although he was not credited at the ceremony; the award was instead presented to the film's co-director Jacques Cousteau. Later in his career he was nominated multiple times for Academy Awards. Malle is also one of only four directors to have won the Golden Lion twice. Malle worked in both French cinema and Hollywood, and he produced both French and English language films. His most famous films include the crime film Ascenseur pour l'échafaud (1958), the World War II drama Lacombe, Lucien (1974), the romantic crime film Atlantic City (1980), the comedy-drama My Dinner with Andre (1981), and the autobiographical film Au revoir les enfants (1987).
Read more or edit on Wikipedia