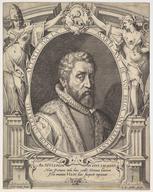 Maerten de Vos, Maerten de Vos the Elder or Marten de Vos (1532 – 4 December 1603) was a Flemish painter. He is known mainly for his history and allegorical paintings and portraits. He was, together with the brothers Ambrosius Francken I and Frans Francken I, one of the leading history painters in the Spanish Netherlands after Frans Floris career slumped in the second half of the sixteenth century as a result of the Iconoclastic fury of the Beeldenstorm. De Vos was a prolific draughtsman and produced numerous designs for the Antwerp printers. These were circulated widely in Europe and the Spanish colonies and contributed to his international reputation and influence. His designs were also used as models for tapestries and stained glass windows. Source: Wikipedia (en)