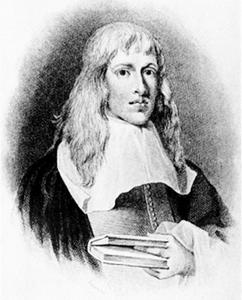 Francis Willughby (sometimes spelt Willoughby) FRS (22 November 1635 – 3 July 1672) was an English ornithologist and ichthyologist, and an early student of linguistics and games. He was born and raised at Middleton Hall, Warwickshire, the only son of an affluent country family. He was a student at Trinity College, Cambridge, where he was tutored by the mathematician and naturalist John Ray, who became a lifetime friend and colleague, and lived with Willughby after 1662 when he lost his livelihood through his refusal to sign the Act of Uniformity. Willughby was elected as a Fellow of the Royal Society in 1661, then aged 27. Willughby, Ray, and others such as John Wilkins were advocates of a new way of studying science, relying on observation and classification, rather than the received authority of Aristotle and the Bible. To this end, Willughby, Ray and their friends undertook a number of journeys to gather information and specimens, initially in England and Wales, but culminating in an extensive tour of continental Europe, visiting museums, libraries and private collections as well as studying local animals and plants. After their continental tour, he and Ray lived and worked mainly at Middleton Hall. Willughby married Emma Barnard in 1668 and the couple had three children. Willughby had suffered bouts of illness over the years, and eventually died of pleurisy in July 1672, aged 36. His premature death meant that it fell to Ray to complete the works on animals they had jointly planned. In due course, Ray published books on birds, fish and invertebrates, the Ornithologiae Libri Tres, Historia Piscium and Historia Insectorum. The Ornithology was also published in an expanded form in English. The books included innovative and effective ways of classifying animals, and all three were influential in the history of life science, including their effect on subsequent natural history writers and their importance in the development of Linnaeus's binomial nomenclature.
Read more or edit on Wikipedia

The ornithology of Francis Willughby of Middleton in the county of Warwick, esq. ... : in three books