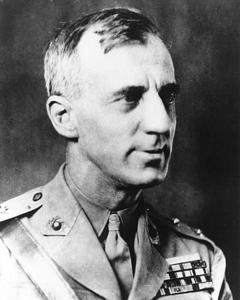 Major General Smedley Darlington Butler (July 30, 1881 – June 21, 1940), nicknamed "Maverick Marine", was a senior United States Marine Corps officer who fought in the Philippine–American War, the Boxer Rebellion, the Mexican Revolution and World War I. During his 34-year career as a Marine, he participated in military actions in the Philippines, China, and Central America; the Caribbean during the Banana Wars; and France in World War I. Butler was, at the time of his death, the most decorated Marine in U.S. history. By the end of his career, Butler had received 16 medals, five for heroism. He is one of 19 men to receive the Medal of Honor twice, one of three to be awarded both the Marine Corps Brevet Medal (along with Wendell Neville and David Porter) and the Medal of Honor, and the only Marine to be awarded the Brevet Medal and two Medals of Honor, all for separate actions. In 1933, he became involved in a controversy known as the Business Plot, when he told a congressional committee that a group of wealthy industrialists were planning a military coup to overthrow President Franklin D. Roosevelt, with Butler selected to lead a march of veterans to become dictator, similar to fascist regimes at that time. The individuals involved all denied the existence of a plot, and the media ridiculed the allegations, but a final report by a special House of Representatives Committee confirmed some of Butler's testimony. Butler later became an outspoken critic of American wars and their consequences. In 1935, Butler wrote a book titled War Is a Racket, where he describes and criticizes the workings of the United States in its foreign actions and wars, such as those in which he had been involved, including large American corporations and other imperialist motivations behind U.S. wars. After retiring from service, he became a popular advocate, speaking at meetings organized by veterans, pacifists, and church groups in the 1930s.
Read more or edit on Wikipedia