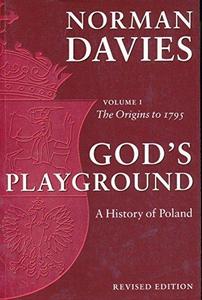 God's Playground: A History of Poland is a history book in two volumes written by Norman Davies, covering a 1000-year history of Poland. Volume 1: The origins to 1795, and Volume 2: 1795 to the present first appeared as the Oxford Clarendon Press publication in 1981 and have since been reprinted in 240 formats (2005), and in 45 formats (2004) translated into Polish as Boże igrzysko : Historia Polski by Elżbieta Tabakowska (2 volumes in 1, with 1183 pages by Znak Publishers of Kraków). Davies was inspired to the title by Jan Kochanowski's 1580s poem Boże igrzysko ("Mankind: Bauble of the Gods"). The book, which most editions split into two volumes, has received favourable reviews in the international press, and is considered by many historians and other scholars to be one of the best English-language books on the subject of the history of Poland. The author received several Polish honours.
Read more or edit on Wikipedia