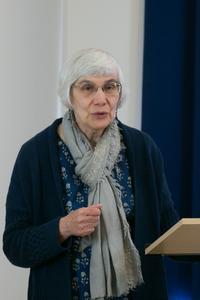 Anna Lowenstein or Löwenstein (born 1951) is a British Esperantist. She worked for the World Esperanto Association 1977–1981. Under the name Anna Brennan she founded and was editor of the feminist magazine Sekso kaj Egaleco 1979–1988, and she edited the 'easy language' section of Kontakto 1983–1986. She has written some non-fiction, and two novels. Her historical novel The Stone City (La Ŝtona Urbo), was first published in English and Esperanto in 1999, and has since been translated into French (2010) and Hungarian (2014). Her second novel Morto de artisto (2008) was published in Esperanto. She is well known as a journalist, teacher and activist in the Esperanto movement, and has been a member of the Academy of Esperanto since 2001. She is married to Renato Corsetti, a former president of the World Esperanto Association. The couple lived together in Italy from 1981, but since 2015 they have been living in the UK.
Read more or edit on Wikipedia