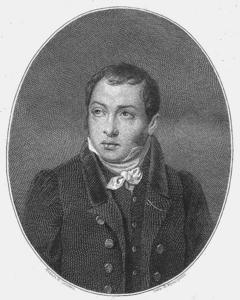 Thaddeus Venediktovich Bulgarin (Russian: Фаддей Венедиктович Булгарин; Polish Jan Tadeusz Krzysztof Bułharyn, 5 July [O.S. 24 June] 1789 – 13 September [O.S. 1 September] 1859), was a Russian writer, journalist and publisher of Polish ancestry. In addition to his newspaper work, he rejuvenated the Russian novel, and published the first theatrical almanac in Russian. During his life, his novels were translated and published in English, French, German, Swedish, Polish, and Czech. He served as a soldier under Napoleon, and in later life as an agent of the Czar's secret police. As a writer his self-imposed mission was to popularize the authoritarian policies of Alexander I and Nicholas I.
Read more or edit on Wikipedia