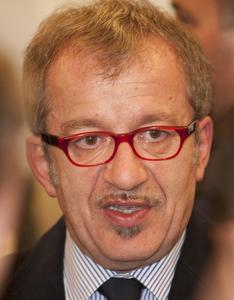 country of citizenship: Italy
language of expression: Italian
educated at: University of Milan
occupation: politician, lawyer
award received: Knights of Pius IX
position held: party leader, councillor, president of Lombardy, member of the Chamber of Deputies of the Italian Republic, Italian Minister of the Interior, Vice President of the Council of Ministers of Italy, Italian Minister of Labour and Social Affairs, Representative of the Parliamentary Assembly of the Council of Europe
@RobertoMaroni_
maroni.leganord

Roberto Ernesto Maroni (Italian pronunciation: [roˈbɛrto maˈroːni]; born 15 March 1955) is an Italian politician from Varese, former President of Lombardy. He was leader of the Northern League, a party seeking autonomy or independence for Northern Italy or Padania. From 1992–2013 he was a Member of the Chamber of Deputies of the Italian Republic, always elected in Lombard constituencies. He was Interior Minister of the Italian Republic from 1994–95, and from 2008–11.
Read more or edit on Wikipedia