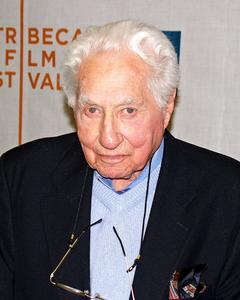 Budd Schulberg (born Seymour Wilson Schulberg, March 27, 1914 – August 5, 2009) was an American screenwriter, television producer, novelist and sports writer. He was known for his novels What Makes Sammy Run? and The Harder They Fall; his Academy Award-winning screenplay for On the Waterfront, and his screenplay for A Face in the Crowd.
Read more or edit on Wikipedia