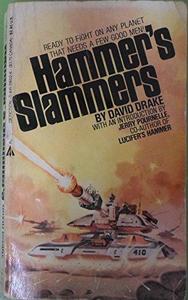 Hammer's Slammers is a 1979 collection of military science fiction short stories by author David Drake. It follows the career of a future mercenary tank regiment called Hammer's Slammers after their leader, Colonel Alois Hammer. This collection, and other novels and stories in the same setting, are collectively called the Hammer stories, and the setting is called the Slammers universe or the Hammerverse. Each of the stories in the novel follows various members of the Slammers, starting with the regiment's creation by the government of the planet Friesland to put down a revolt on the Friesland colony world of Melpomene, in which Colonel Hammer is the focal character, and who transforms the unit into an independent mercenary organization. The reader is also introduced to recurring characters such as Joachim Steuben, Hammer's bodyguard and later commander of the Slammers' military police, a gay sociopath and master marksman devoted to his colonel; Sergeant (later Major) Danny Pritchard; recruit (later Sergeant-Commander) Rob Jenne; Margritte DiManzio, whose husband is killed by mercenaries from a different regiment and signs on with the Slammers; and Sergeant "Ripper Jack" Scratchard, who shows how the Slammers infantry ties in with the regiment's combat cars and hovertanks. The book concludes with the story "Standing Down," in which Friesland revolutionaries hire the Slammers to overthrow the government of Friesland. Colonel Hammer takes over the revolution and the planet, becomes President of Friesland, and Hammer's unit becomes the 1st Regiment of the Friesland Defense Force. Drake based the Slammers on his service with the 11th Armored Cavalry Regiment in Vietnam and Cambodia during the Vietnam War. The plots of his works are often inspired by historical or mythological sources. For example, he retells the story of Jason and the Argonauts in The Voyage, and part of the Odyssey in Cross the Stars. Other stories borrow from pulp-era fiction (The Sharp End is based on Dashiell Hammett's Red Harvest).
Read more or edit on Wikipedia