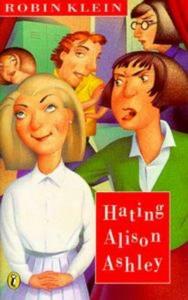 Hating Alison Ashley is a 1984 Australian novel. (Puffin Books, London and Melbourne, ISBN 0-14-031672-8) Written by science fiction and children's author Robin Klein. Written as a preteen comedy, the book has a strong moral undercurrent about the pursuit of happiness and perfection, the pressures of growing up and the power of friendship. It portrays the agonies of school-girl rivalries, constant embarrassment by family, and painful and often brutally funny awkwardness and insecurity. One of Klein's most popular preteen novels, it has since become a standard English text for school students across Australia. The book was nominated for 8 Australian literature awards and won the Young Australian Best Book Award (YABBA) in 1987 and the Kids Own Australian Literature Award (KOALA) in 2013. It has since become a play, adapted by Richard Tulloch and directed by Nici Wood, and a film, Hating Alison Ashley directed by Geoff Bennett with Delta Goodrem in the title role.
Read more or edit on Wikipedia