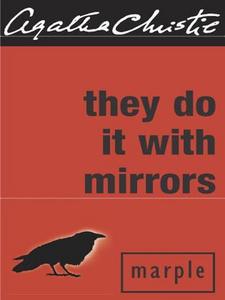 They Do It with Mirrors

They Do It with Mirrors is a detective fiction novel by Agatha Christie, first published in the US by Dodd, Mead and Company in 1952 under the title of Murder with Mirrors and in UK by the Collins Crime Club on 17 November that year under Christie's original title. The US edition retailed at $2.50 and the UK edition at ten shillings and sixpence (10/6). The book features her detective Miss Marple. One review at the time of publication praised the essence of the plot but felt the latter half of the novel moved too slowly. A later review considered that this novel showed "Definite signs of decline." and felt the author was not entirely comfortable with the setting she described in the novel.
Read more or edit on Wikipedia