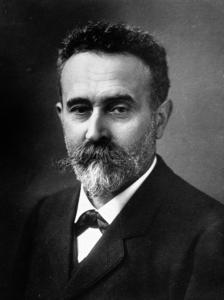 Alphonse Bertillon (French: [bɛʁtijɔ̃]; 22 April 1853 – 13 February 1914) was a French police officer and biometrics researcher who applied the anthropological technique of anthropometry to law enforcement creating an identification system based on physical measurements. Anthropometry was the first scientific system used by police to identify criminals. Before that time, criminals could only be identified by name or photograph. The method was eventually supplanted by fingerprinting.He is also the inventor of the mug shot. Photographing of criminals began in the 1840s only a few years after the invention of photography, but it was not until 1888 that Bertillon standardized the process.
Read more or edit on Wikipedia