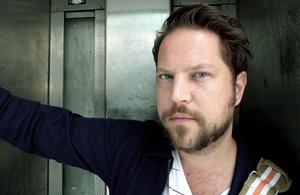 Thomas Engström (born 1975), is a Swedish novelist and journalist. His third novel, West of Liberty, was published in October 2013 by Albert Bonniers Förlag. The book was the first in a series of political thrillers featuring former Stasi agent and CIA freelancer Ludwig Licht. The series explores the harsh realities of today's international political landscape. The Ludwig Licht series has been sold to a number of countries, including Germany, Poland, The Netherlands, Russia, The Czech Republic and Greece. During early 2018, the books started to be filmed as an international TV series by, among others, German ZDF Network Movie and Swedish Anagram. International distribution is handled by British ITV. The role of Ludwig Licht is played by Wotan Wilke Möhring. West of Liberty earned Engström the Swedish Crime Writers' Academy's award for best crime writing debut of 2013. South of Hell was published in August 2014. It takes place in rural Pennsylvania, as well as Washington, DC. It was nominated for the Best Swedish Suspense Novel of the Year Award. The third installment, North of Paradise, was published in October 2015. The setting, this time, is southern Florida and Cuba. In 2017, the series concluded with East of the Abyss, taking place in Ukraine, Armenia and the republic of Georgia. The book was nominated for the Best Swedish Suspense Novel of the Year Award.
Read more or edit on Wikipedia