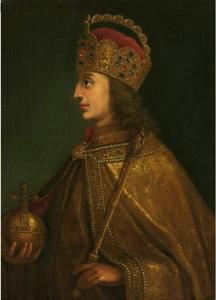 Louis IV (German: Ludwig; 1 April 1282 – 11 October 1347), called the Bavarian, of the house of Wittelsbach, was King of the Romans from 1314, King of Italy from 1327, and Holy Roman Emperor from 1328. Louis' election as king of Germany in 1314 was controversial, as his Habsburg cousin Frederick the Fair was simultaneously elected king by a separate set of electors. Louis defeated Frederick in the Battle of Mühldorf in 1322, and the two eventually reconciled. Louis was opposed and excommunicated by the French Pope John XXII; Louis in turn attempted to depose the pope and install an anti-pope. Louis IV was Duke of Upper Bavaria from 1294 to 1301 together with his elder brother Rudolf I, was Margrave of Brandenburg until 1323, and Count Palatine of the Rhine until 1329, and became Duke of Lower Bavaria in 1340. He became Count of Hainaut, Holland, Zeeland, and Friesland in 1345 when his wife Margaret inherited those domains.
Read more or edit on Wikipedia