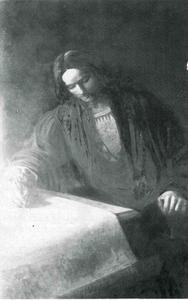 Martin Waldseemüller (c. 1470 – 16 March 1520) was a German cartographer and humanist scholar. Sometimes known by the Latinized form of his name, Hylacomylus, his work was influential among contemporary cartographers. He and his collaborator Matthias Ringmann are credited with the first recorded usage of the word America to name a portion of the New World in honour of the Italian explorer Amerigo Vespucci. Waldseemüller was also the first to map South America as a continent separate from Asia, the first to produce a printed globe and the first to create a printed wall map of Europe. A set of his maps printed as an appendix to the 1513 edition of Ptolemy's Geography is considered to be the first example of a modern atlas.
Read more or edit on Wikipedia