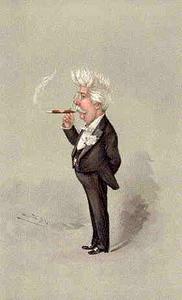 Sir Henry William Lucy JP, (5 December 1842 – 20 February 1924) was a famed English political journalist of the Victorian era, acknowledged as the first great lobby correspondent. He wrote for Punch, Strand Magazine, The Observer, The New York Times and many other papers. He also wrote books, detailing the workings of the Houses of Parliament and two autobiographies. He was knighted in 1909. Lucy was widely known also in North America. President Woodrow Wilson said Lucy's articles in The Gentleman's Magazine inspired his mind and propelled him into public life. Lucy was a serious parliamentary commentator, but also an accomplished humorist and a parliamentary sketch-writer. His friend, the explorer Ernest Shackleton, named a mountain in Antarctica after him.
Read more or edit on Wikipedia