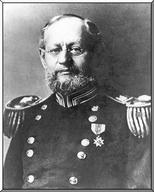 Henry Martyn Robert (May 2, 1837 – May 11, 1923) was an American soldier, engineer, and author. In 1876, Robert published the first edition of his manual of parliamentary procedure, Robert's Rules of Order, which remains today the most common parliamentary authority in the United States. Source: Wikipedia (en)