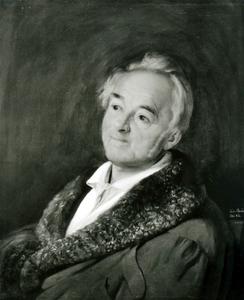 Ernst Moritz Arndt (26 December 1769 – 29 January 1860) was a German nationalist historian, writer and poet. Early in his life, he fought for the abolition of serfdom, later against Napoleonic dominance over Germany. Arndt had to flee to Sweden for some time due to his anti-French positions. He is one of the main founders of German nationalism and the 19th century movement for German unification. After the Carlsbad Decrees, the forces of the restoration counted him as a demagogue. Arndt played an important role for the early national and liberal Burschenschaft movement and for the unification movement, and his song "Was ist des Deutschen Vaterland?" acted as an unofficial German national anthem. Long after his death, his anti-French propaganda was used again, in both World Wars. This, together with some strongly antisemitic and anti-Polish statements, has led to a highly critical view of Arndt today.
Read more or edit on Wikipedia