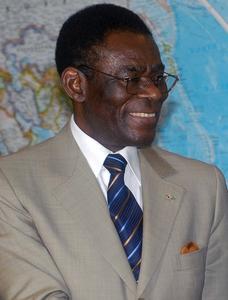 Teodoro Obiang Nguema Mbasogo (Spanish pronunciation: [teoˈðoɾo oˈβjaŋɡ ˈŋɡema ˈmbasoɡo]; born 5 June 1942) is an Equatoguinean politician who has been the 2nd President of Equatorial Guinea since August 1979. He ousted his uncle, Francisco Macías Nguema, in an August 1979 military coup and has overseen Equatorial Guinea's emergence as an important oil producer, beginning in the 1990s. Obiang was Chairperson of the African Union from 31 January 2011 to 29 January 2012. He is the second longest consecutively serving current non-royal national leader in the world.Obiang has been widely accused of corruption and abuse of power. In marked contrast to the trend toward democracy in most of Africa, Equatorial Guinea is currently a dominant-party state, in which Obiang's Democratic Party of Equatorial Guinea (PDGE) holds virtually all governing power in the nation. The constitution provides Obiang sweeping powers, including the right to rule by decree, effectively making his government a legal dictatorship.
Read more or edit on Wikipedia