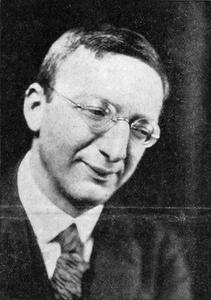 Bruno Alfred Döblin (German: [ˈalfʁeːt døːˈbliːn] (listen); 10 August 1878 – 26 June 1957) was a German novelist, essayist, and doctor, best known for his novel Berlin Alexanderplatz (1929). A prolific writer whose œuvre spans more than half a century and a wide variety of literary movements and styles, Döblin is one of the most important figures of German literary modernism. His complete works comprise over a dozen novels ranging in genre from historical novels to science fiction to novels about the modern metropolis; several dramas, radio plays, and screenplays; a true crime story; a travel account; two book-length philosophical treatises; scores of essays on politics, religion, art, and society; and numerous letters—his complete works, republished by Deutscher Taschenbuch Verlag and Fischer Verlag, span more than thirty volumes. His first published novel, Die drei Sprünge des Wang-lung (The Three Leaps of Wang Lun), appeared in 1915 and his final novel, Hamlet oder Die lange Nacht nimmt ein Ende (Tales of a Long Night) was published in 1956, one year before his death. Born in Stettin, Germany (now Szczecin, Poland), to assimilated Jews, Döblin moved with his mother and siblings to Berlin when he was ten years old after his father had abandoned them. Döblin would live in Berlin for almost all of the next forty-five years, engaging with such key figures of the prewar and Weimar-era German cultural scene as Herwarth Walden and the circle of Expressionists, Bertolt Brecht, and Thomas Mann. Only a few years after his rise to literary celebrity with the 1929 publication of Berlin Alexanderplatz, Döblin was forced into exile by the rise of the Nazi dictatorship. Works by Döblin were also considered "Asphalt literature". He spent 1933–1940 in France and then was forced to flee again at the start of the Second World War. Like many other German émigrés he spent the war years in Los Angeles, where he converted to Catholicism. He moved to West Germany after the war but did not feel at home in postwar Germany's conservative cultural climate and returned to France. His final years were marked by poor health and financial difficulties, and his literary work was met with relative neglect. Despite the canonic status of Berlin Alexanderplatz, Döblin is often characterized as an under-recognized or even as a forgotten author; while his work has received increasing critical attention (mostly in German) over the last few decades, he is much less well known by the reading public than other German novelists such as Thomas Mann, Günter Grass or Franz Kafka.
Read more or edit on Wikipedia