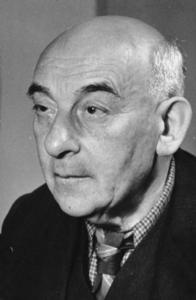 Victor Klemperer (9 October 1881 – 11 February 1960) was a German scholar who also became known as a diarist. His journals, published in Germany in 1995, detailed his life under the German Empire, the Weimar Republic, the Third Reich, and the German Democratic Republic. Those covering the period of the Third Reich have since become standard sources and have been extensively quoted by Saul Friedländer, Michael Burleigh, Richard J. Evans, and Max Hastings.
Read more or edit on Wikipedia