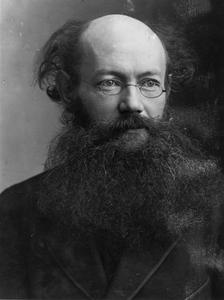 Pyotr Alexeyevich Kropotkin (; Russian: Пётр Алексе́евич Кропо́ткин Russian pronunciation: [ˈpʲɵtr ɐlʲɪkˈsʲejɪvʲɪt͡ɕ krɐˈpotkʲɪn]; 9 December 1842 – 8 February 1921) was a Russian anarchist, socialist, revolutionary, economist, sociologist, historian, zoologist, political scientist, human geographer and philosopher who advocated anarcho-communism. He was also an activist, essayist, researcher and writer. Born into an aristocratic land-owning family, Kropotkin attended a military school and later served as an officer in Siberia, where he participated in several geological expeditions. He was imprisoned for his activism in 1874 and managed to escape two years later. He spent the next 41 years in exile in Switzerland, France (where he was imprisoned for almost four years) and England. While in exile, he gave lectures and published widely on anarchism and geography. Kropotkin returned to Russia after the Russian Revolution in 1917, but he was disappointed by the Bolshevik state. Kropotkin was a proponent of a decentralised communist society free from central government and based on voluntary associations of self-governing communities and worker-run enterprises. He wrote many books, pamphlets and articles, the most prominent being The Conquest of Bread and Fields, Factories and Workshops, but also Mutual Aid: A Factor of Evolution, his principal scientific offering. He contributed the article on anarchism to the Encyclopædia Britannica Eleventh Edition and left unfinished a work on anarchist ethical philosophy.
Read more or edit on Wikipedia