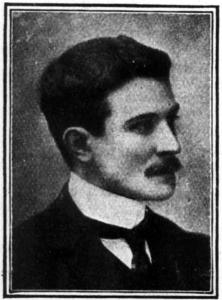 Perceval Gibbon (4 November 1879 – 30 May 1926) was an author and journalist, serving for the Rand Daily Mail in South Africa, as well as for other publications. Gibbon had travelled to South Africa in 1898, moved to the war front and became the representative of a syndicate of colonial newspapers at the outbreak of the Anglo-Boer War. He is best remembered for his short stories, which often contained an ironic twist at the end. Gibbon's influence on the work of later South African authors has been acknowledged. For instance, the fictional narrator of Vrouw Grobelaar's Leading Cases (1905) is said to be a forerunner of Herman Charles Bosman's character Oom Schalk Lourens.He was born in Trelech, Carmarthenshire, Wales, and was educated in the Moravian School, in Königsfeld of Baden, Germany. Gibbon worked as a merchant mariner, travelling in Europe, Africa, and the Americas. Perceval Gibbon was a friend of the writer Joseph Conrad, and dedicated his novel Flower o' the Peach (1911) to Joseph Conrad and Jessie Conrad. Conrad dedicated his novel Victory (1915) to Perceval and Maisie Gibbon.Gibbon's early works were influenced by his extensive travels throughout Europe, America, and Africa. During World War I he was a war correspondent with the Italian Army from 1917 to 1918. In 1918–1919, Perceval Gibbon was a Major in the British Royal Marines. In 2007 the work Margaret Harding was adapted into a screenplay by Meg Rickards who directed the mini-series and the made-for-TV feature film for SABC.
Read more or edit on Wikipedia