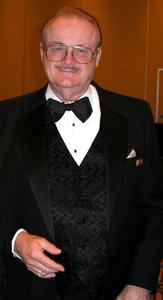 Jerry Eugene Pournelle (; August 7, 1933 – September 8, 2017) was an American polymath: scientist in the area of operations research and human factors research, science fiction writer, essayist, journalist, and one of the first bloggers. In the 1960s and early 1970s, he worked in the aerospace industry, but eventually focused on his writing career. In an obituary in Gizmodo, he is described as "a tireless ambassador for the future."Pournelle's hard science fiction writing received multiple awards. In addition to his solo writing, he wrote several novels with collaborators including Larry Niven. Pournelle served a term as President of the Science Fiction and Fantasy Writers of America.Pournelle's journalism focused primarily on the computer industry, astronomy, and space exploration. From the 1970s until the early 1990s, he contributed to the computer magazine Byte, writing from the viewpoint of an intelligent user, with the oft-cited credo, "We do this stuff so you won't have to." He created one of the first blogs, entitled "Chaos Manor", which included commentary about politics, computer technology, space technology, and science fiction. Pournelle held paleoconservative political views, which were sometimes expressed in his fiction. He was one of the founders of the Citizens' Advisory Council on National Space Policy, which developed some of the Reagan Administration's space initiatives, including the earliest versions of what would become the Strategic Defense Initiative.
Read more or edit on Wikipedia