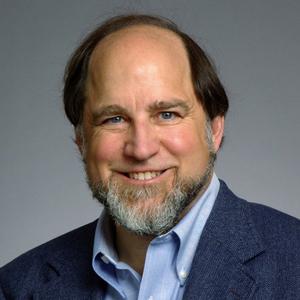 Ronald Linn Rivest (; born May 6, 1947) is a cryptographer and an Institute Professor at MIT. He is a member of MIT's Department of Electrical Engineering and Computer Science (EECS) and a member of MIT's Computer Science and Artificial Intelligence Laboratory (CSAIL). His work has spanned the fields of algorithms and combinatorics, cryptography, machine learning, and election integrity. Rivest is one of the inventors of the RSA algorithm (along with Adi Shamir and Len Adleman). He is the inventor of the symmetric key encryption algorithms RC2, RC4, RC5, and co-inventor of RC6. The "RC" stands for "Rivest Cipher", or alternatively, "Ron's Code". (RC3 was broken at RSA Security during development; similarly, RC1 was never published.) He also authored the MD2, MD4, MD5 and MD6 cryptographic hash functions.
Read more or edit on Wikipedia