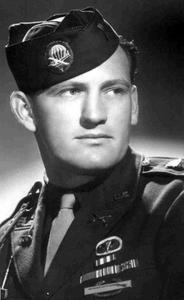 Lynn Davis "Buck" Compton (December 31, 1921 – February 25, 2012) was an American jurist, police officer, and soldier. In his legal career, he served as a prosecutor and California Court of Appeal judge, and is most notable as having been the lead prosecutor in Sirhan Sirhan's trial for the assassination of Robert F. Kennedy. Previously, he served with the Los Angeles Police Department. During World War II, he was a commissioned officer with E Company, 2nd Battalion, 506th Parachute Infantry Regiment, in the 101st Airborne Division of the United States Army. Compton was portrayed in the HBO miniseries Band of Brothers by Neal McDonough.
Read more or edit on Wikipedia