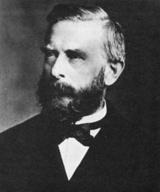 Wilhelm Karl Hartwich (or Hartwig) Peters (22 April 1815 in Koldenbüttel – 20 April 1883) was a German naturalist and explorer. He was assistant to the anatomist Johannes Peter Müller and later became curator of the Berlin Zoological Museum. Encouraged by Müller and the explorer Alexander von Humboldt, Peters travelled to Mozambique via Angola in September 1842, exploring the coastal region and the Zambesi River. He returned to Berlin with an enormous collection of natural history specimens, which he then described in Naturwissenschaftliche Reise nach Mossambique... in den Jahren 1842 bis 1848 ausgeführt (1852–1882). The work was comprehensive in its coverage, dealing with mammals, birds, reptiles, amphibians, river fish, insects and botany. He replaced Martin Lichtenstein as curator of the museum in 1858, and in the same year he was elected a foreign member of the Royal Swedish Academy of Sciences. In a few years, he greatly increased the Berlin Museum's herpetological collection to a size comparable to those of Paris and London. Herpetology was Peters' main interest, and he described 122 new genera and 649 species from around the world. Source: Wikipedia (en)