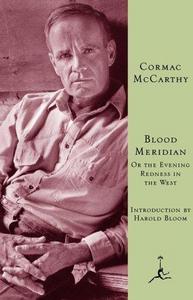 Blood Meridian or The Evening Redness in the West is a 1985 epic Western (or anti-Western) novel by American author Cormac McCarthy. McCarthy's fifth book, it was published by Random House. The majority of the story follows a teenager referred to only as "the kid," with the bulk of the text devoted to his experiences with the Glanton gang, a historical group of scalp hunters who massacred Native Americans and others in the United States–Mexico borderlands from 1849 to 1850 for bounty, pleasure, and eventually out of nihilistic habit. The role of antagonist is gradually filled by Judge Holden, a physically massive, highly-educated, exceptionally multi-talented member of the gang who is depicted as completely bald from head to toe. Although the novel initially generated only lukewarm critical and commercial reception, it has since become highly acclaimed and is widely recognized as McCarthy's masterpiece, as well as one of the greatest American novels of all time.
Read more or edit on Wikipedia