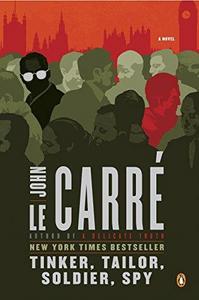 Tinker Tailor Soldier Spy is a 1974 spy novel by British author John le Carré. It follows the endeavors of taciturn, aging spymaster George Smiley to uncover a Soviet mole in the British Secret Intelligence Service. Since the time of its publication, the novel has received critical acclaim for its complex social commentary and lack of sensationalism, and remains a staple of the spy fiction genre.
Read more or edit on Wikipedia