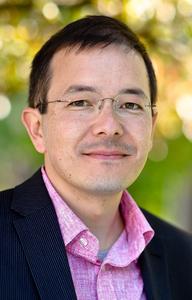 Shaun Tan (born 1974) is an Australian artist, writer and film maker. He won an Academy Award for The Lost Thing, a 2011 animated film adaptation of a 2000 picture book he wrote and illustrated. Other books he has written and illustrated include The Red Tree and The Arrival. Tan was born in Fremantle, Western Australia, and grew up in the northern suburbs of Perth, Western Australia. In 2006, his wordless graphic novel The Arrival won the Book of the Year prize as part of the New South Wales Premier's Literary Awards. The same book won the Children's Book Council of Australia Picture Book of the Year award in 2007. and the Western Australian Premier's Book Awards Premier's Prize in 2006.Tan's work has been described as an "Australian vernacular" that is "at once banal and uncanny, familiar and strange, local and universal, reassuring and scary, intimate and remote, guttersnipe and sprezzatura. No rhetoric, no straining for effect. Never other than itself."For his career contribution to "children's and young adult literature in the broadest sense" Tan won the 2011 Astrid Lindgren Memorial Award from the Swedish Arts Council, the biggest prize in children's literature.
Read more or edit on Wikipedia