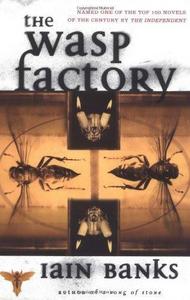 The Wasp Factory is the first novel by Scottish writer Iain Banks, published in 1984. Before the publication of The Wasp Factory, Banks had written several science fiction novels that had not been accepted for publication. Banks decided to try a more mainstream novel in the hopes that it would be more readily accepted, and wrote about a psychopathic teenager living on a remote Scottish island. According to Banks, this allowed him to treat the story as something resembling science fiction – the island could be envisaged as a planet, and Frank, the protagonist, almost as an alien. Following the success of The Wasp Factory, Banks began to write full-time. The Wasp Factory is written from a first person perspective, told by 16-year-old Francis Cauldhame ("Frank"), describing his childhood and all that remains of it. Frank observes many shamanistic rituals of his own invention, and it is soon revealed that Frank killed three children before he reached the age of ten himself. The book sold well, but was greeted with a mixture of acclaim and criticism, due to its gruesome depiction of violence. The Irish Times called it "a work of unparalleled depravity."
Read more or edit on Wikipedia