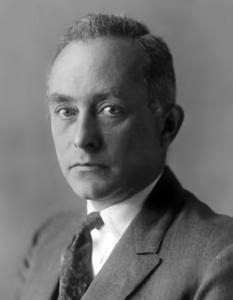 Max Born (German pronunciation: [ˈmaks ˈbɔɐ̯n] (listen); 11 December 1882 – 5 January 1970) was a German physicist and mathematician who was instrumental in the development of quantum mechanics. He also made contributions to solid-state physics and optics and supervised the work of a number of notable physicists in the 1920s and 1930s. Born won the 1954 Nobel Prize in Physics for his "fundamental research in quantum mechanics, especially in the statistical interpretation of the wave function".Born entered the University of Göttingen in 1904, where he met the three renowned mathematicians Felix Klein, David Hilbert, and Hermann Minkowski. He wrote his Ph.D. thesis on the subject of "Stability of Elastica in a Plane and Space", winning the university's Philosophy Faculty Prize. In 1905, he began researching special relativity with Minkowski, and subsequently wrote his habilitation thesis on the Thomson model of the atom. A chance meeting with Fritz Haber in Berlin in 1918 led to discussion of how an ionic compound is formed when a metal reacts with a halogen, which is today known as the Born–Haber cycle. In World War I, after originally being placed as a radio operator, he was moved to research duties regarding sound ranging due to his specialist knowledge. In 1921, Born returned to Göttingen, arranging another chair for his long-time friend and colleague James Franck. Under Born, Göttingen became one of the world's foremost centres for physics. In 1925, Born and Werner Heisenberg formulated the matrix mechanics representation of quantum mechanics. The following year, he formulated the now-standard interpretation of the probability density function for ψ*ψ in the Schrödinger equation, for which he was awarded the Nobel Prize in 1954. His influence extended far beyond his own research. Max Delbrück, Siegfried Flügge, Friedrich Hund, Pascual Jordan, Maria Goeppert-Mayer, Lothar Wolfgang Nordheim, Robert Oppenheimer, and Victor Weisskopf all received their Ph.D. degrees under Born at Göttingen, and his assistants included Enrico Fermi, Werner Heisenberg, Gerhard Herzberg, Friedrich Hund, Pascual Jordan, Wolfgang Pauli, Léon Rosenfeld, Edward Teller, and Eugene Wigner. In January 1933, the Nazi Party came to power in Germany, and Born, who was Jewish, was suspended from his professorship at the University of Göttingen. He emigrated to the United Kingdom, where he took a job at St John's College, Cambridge, and wrote a popular science book, The Restless Universe, as well as Atomic Physics, which soon became a standard textbook. In October 1936, he became the Tait Professor of Natural Philosophy at the University of Edinburgh, where, working with German-born assistants E. Walter Kellermann and Klaus Fuchs, he continued his research into physics. Born became a naturalised British subject on 31 August 1939, one day before World War II broke out in Europe. He remained in Edinburgh until 1952. He retired to Bad Pyrmont, in West Germany, and died in hospital in Göttingen on 5 January 1970.
Read more or edit on Wikipedia