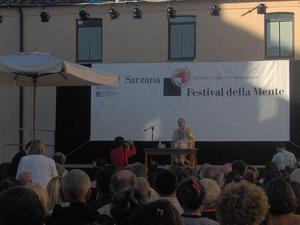 Alessandro Piperno (born March 25, 1972 in Rome) is an Italian writer and literary critic of Jewish descent, having a Jewish father and a Catholic mother. He graduated in French Literature at the University of Rome, where he currently teaches and researches. In 2000, he published the controversial critical essay on Marcel Proust, inflammatorily entitled "Proust antiebreo (Proust, Anti-Jew)". In 2005, he achieved notoriety with his first novel Con le peggiori intenzioni (translated as The Worst Intentions). Following general critical acclaim, and positive reviews on the Corriere della Sera (defining him the "new Proust"), his book became a bestseller in Italy (with 200,000 copies sold in a few months). For this book he won the Premio Campiello for best first novel. The book narrates the story of the Sonnino family spanning half a century, and especially the life of its youngest member, Daniel. Piperno's book attracted noticeable interest with the media, involving Piperno in a number of TV interviews and literary debates. His writing is described both as ironic and ironically self-referential, with a disenchanted view of society and life in general. His critics have emphasised Piperno's difficult storyline and its allegedly confused narration. He states his inspiration as coming from the great literature of the 19th century, as well as that of contemporary America. Besides Proust (naturally), he's been associated to Philip Roth. In 2012, Piperno won the Premio Strega, Italy's leading literary award, for his novel Inseparabili (2012). It traces the lives of two brothers, Philip and Samuel Pontecorvo, after the painful death of their father Leo Pontecorvo. It is a sequel of Persecuzione published in 2010. Piperno studied guitar and has a strong interest in music. Until 2005, when he reached success as a writer, he was part of the Roman rock-blues Random as the solo guitarist and singer. He's also a fan of soccer team Lazio.
Read more or edit on Wikipedia