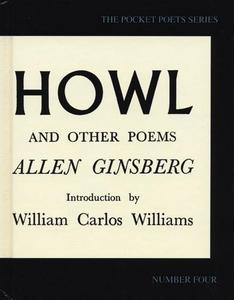 Howl and Other Poems

Howl and Other Poems is a collection of poetry by Allen Ginsberg published November 1, 1956. It contains Ginsberg's most famous poem, "Howl", which is considered to be one of the principal works of the Beat Generation as well as "A Supermarket in California", "Transcription of Organ Music", "Sunflower Sutra", "America", "In the Baggage Room at Greyhound", and some of his earlier works. For printing the collection, the publisher Lawrence Ferlinghetti, another well-known poet, was arrested and charged with obscenity. On October 3, 1957, Judge Clayton W. Horn found Ferlinghetti not guilty of the obscenity charge, and 5,000 more copies of the text were printed to meet the public demand, which had risen in response to the publicity surrounding the trial. "Howl and Other Poems" contains two of the most well-known poems from the Beat Generation, "Howl" and "A Supermarket in California", which have been reprinted in other collections, including the Norton Anthology of American Literature. The collection was initially dedicated to Lucien Carr but, upon Carr's request, his name was later removed from all future editions.
Read more or edit on Wikipedia