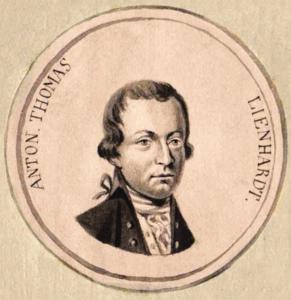 Anton Tomaž Linhart (December 11, 1756 – July 14, 1795) was a Carniolan playwright and historian, best known as the author of the first comedy and theatrical play in general in Slovene, Županova Micka (Micka, the Mayor's Daughter). He is also considered the father of Slovene historiography, since he was the first historian to write a history of all Slovenes as a unit, rejecting the previous concept which focused on single historical provinces. He was the first one to define the Slovenes as a separate ethnic group and set the foundations of Slovene ethnography.
Read more or edit on Wikipedia