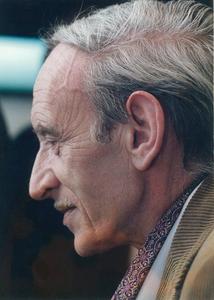 Juan José Cuadros Perez (Palencia, October 9, 1926 - Madrid, May 27, 1990) was a Spanish writer of poetry and prose. His father, Juan José Cuadros, was a native of Beas de Segura (Jaén), which, in the 1920s met and married Josefa Perez Palencia. John Joseph was the oldest of four children. He grew up in Beas de Segura (Jaén), a town that belongs to the Sierra de Segura, in Andalusia. In 1941 he moved to Baeza, to continue high school. It is from 1945 when part to Madrid and began to study sciences in the Faculty of Sciences, then had to leave school, posing as opposition to the Body of Surveyors and taking place in the National Geographic Institute, finally settling to live in the capital, combining his work with the surveyor of his fondness for the prose and poetry. In Madrid met Maruja Fernandez de Ayala, pharmaceutical, whom he married and born of the marriage was born the only daughter, Almudena. Thanks to the work of his wife, meet other poets associated with the branch of pharmacy, as in the case of Federico Muelas and later to Rafael Palma, organized in their respective reboticas gatherings attended by among others José García Nieto, Santiago Ammon, Ramon Garciasol etc.After the death of his mother in 1958, feels a special nostalgia for his homeland, and frequent visits to Palencia, where he met other poets soon permeating and integrating them in the group's magazine from Rocamador. that date onwards when dialing an intense period of publications in different newspapers and magazines, and participate in various literary gatherings. His work surveyor also gave him the opportunity to visit virtually almost all Spanish geography, all publishing fluctuated more life half a dozen books and numerous other publications and many books that came to light after his untimely death in the Spring 1990. His great desire and recognized literary merit is offset by their peers, receiving countless posthumous tributes in addition to public and private institutions. In 1997 the city of Palencia Palencia inaugurated a street with his name, also his unpublished poems were published, and even in 2008 César Augusto Ayuso meets his literary studies, giving way in the book Love recalling the classic authors who influenced his work. In 2010, Beas de Segura pays tribute in memory of the 20 years after his death, with a cultural event sponsored by the City of Beas.
Read more or edit on Wikipedia