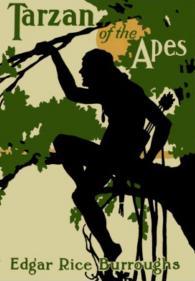 Tarzan is a series of 24 adventure novels written by Edgar Rice Burroughs (1875–1950) and published between 1912 and 1966, followed by several novels either co-written by Burroughs, or officially authorized by his estate. There are also two works written by Burroughs especially for children that are not considered part of the main series. The series is considered a classic of literature and is the author's best-known work. The titular Tarzan has been called one of the best-known literary characters in the world. Tarzan has been adapted many times, complete or in part, for radio, television, stage, and cinema—it has been adapted for film more times than any book. As of 2020 the first ten books, through Tarzan and the Ant Men, are in the public domain worldwide. The later works are still under copyright in the United States.
Read more or edit on Wikipedia