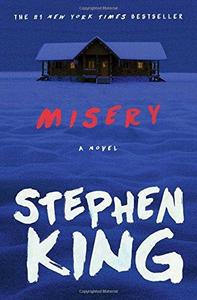 Misery is an American psychological horror thriller novel written by Stephen King and first published by Viking Press on June 8, 1987. The novel's narrative is based on the relationship of its two main characters – the romance novelist Paul Sheldon and his deranged self-proclaimed number one fan Annie Wilkes. When Paul is seriously injured following a car accident, former nurse Annie brings him to her home, where Paul receives treatment and doses of pain medication. Paul realizes that he is a prisoner and is forced to indulge his captor's whims. The novel's title has two meanings: it is the name carried by the central heroine of Paul's book series, and King described such a state of emotion during the novel's writing. He has stated that Annie is a stand-in for cocaine. King has outlined the creation of Misery in his memoirs, and mentioned that the image of Annie Wilkes came to him in a dream. King planned the book to be released under the pseudonym Richard Bachman, but his identity was discovered before the book's release.Misery won the first Bram Stoker Award for Novel in 1987 and was nominated for the 1988 World Fantasy Award for Best Novel. Critical reception of Misery was positive. Reviewers praised King for avoiding the fantasy elements of his past works, and noted the novel's parallels with King's personal life and the study of the relationship between celebrities and their fans. The novel, which took fourth place in the 1987 bestseller list, was adapted into a film directed by Rob Reiner in 1990, and into a theatrical production starring Laurie Metcalf and Bruce Willis in 2015.
Read more or edit on Wikipedia