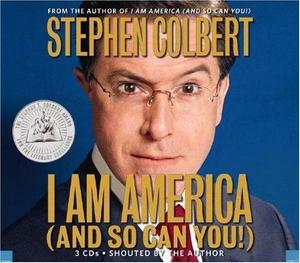 I Am America (And So Can You!) is a 2007 satirical book by American comedian Stephen Colbert and the writers of The Colbert Report. It was released on October 9, 2007, with the audiobook edition released several days earlier. The book is loosely structured around the fictional life story of Stephen Colbert as he appears on The Colbert Report. As of the April 6, 2008 publishing, the book had been on the New York Times Bestseller List in the Hardcover Nonfiction category for twenty-four weeks, ranking number one for fourteen of them.
Read more or edit on Wikipedia