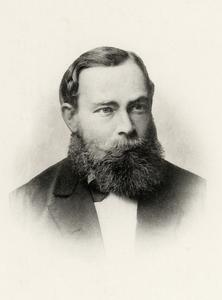 Friedrich Ludwig Gottlob Frege (; German: [ˈɡɔtloːp ˈfreːɡə]; 8 November 1848 – 26 July 1925) was a German philosopher, logician, and mathematician. He worked as a mathematics professor at the University of Jena, and is understood by many to be the father of analytic philosophy, concentrating on the philosophy of language, logic, and mathematics. Though he was largely ignored during his lifetime, Giuseppe Peano (1858–1932), Bertrand Russell (1872–1970), and, to some extent, Ludwig Wittgenstein (1889–1951) introduced his work to later generations of philosophers. In the early 21st century, Frege was widely considered to be the greatest logician since Aristotle, and one of the most profound philosophers of mathematics ever.His contributions include the development of modern logic in the Begriffsschrift and work in the foundations of mathematics. His book the Foundations of Arithmetic is the seminal text of the logicist project, and is cited by Michael Dummett as where to pinpoint the linguistic turn. His philosophical papers "On Sense and Reference" and "The Thought" are also widely cited. The former argues for two different types of meaning and descriptivism. In Foundations and "The Thought", Frege argues for Platonism against psychologism or formalism, concerning numbers and propositions respectively. Russell's paradox undermined the logicist project by showing Frege's Basic Law V in the Foundations to be false.
Read more or edit on Wikipedia