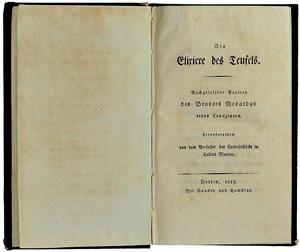 The Devil's Elixirs (German: Die Elixiere des Teufels) is a novel by E. T. A. Hoffmann. Published in 1815, the basic idea for the story was adopted from Matthew Gregory Lewis's novel The Monk, which is itself mentioned in the text. Although Hoffmann himself was not particularly religious, he was nevertheless so strongly impressed by the life and atmosphere on a visit to a monastery of the Order of Friars Minor Capuchin, that he determined to write the novel in that religious setting. Characteristically for Hoffmann, he wrote the entire novel in only a few weeks. The Devil's Elixirs is described by some literary critics as fitting into the Gothic novel genre (called Schauerroman in German). It can be classified in the subgenre of dark romanticism.
Read more or edit on Wikipedia