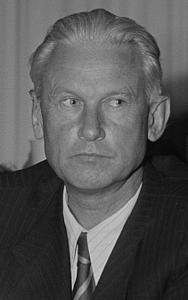 Alexander Alexandrovich Fadeyev (Russian: Алекса́ндр Алекса́ндрович Фаде́ев; 24 December [O.S. 11 December] 1901 – 13 May 1956) was a Soviet writer, one of the co-founders of the Union of Soviet Writers and its chairman from 1946 to 1954.
Read more or edit on Wikipedia